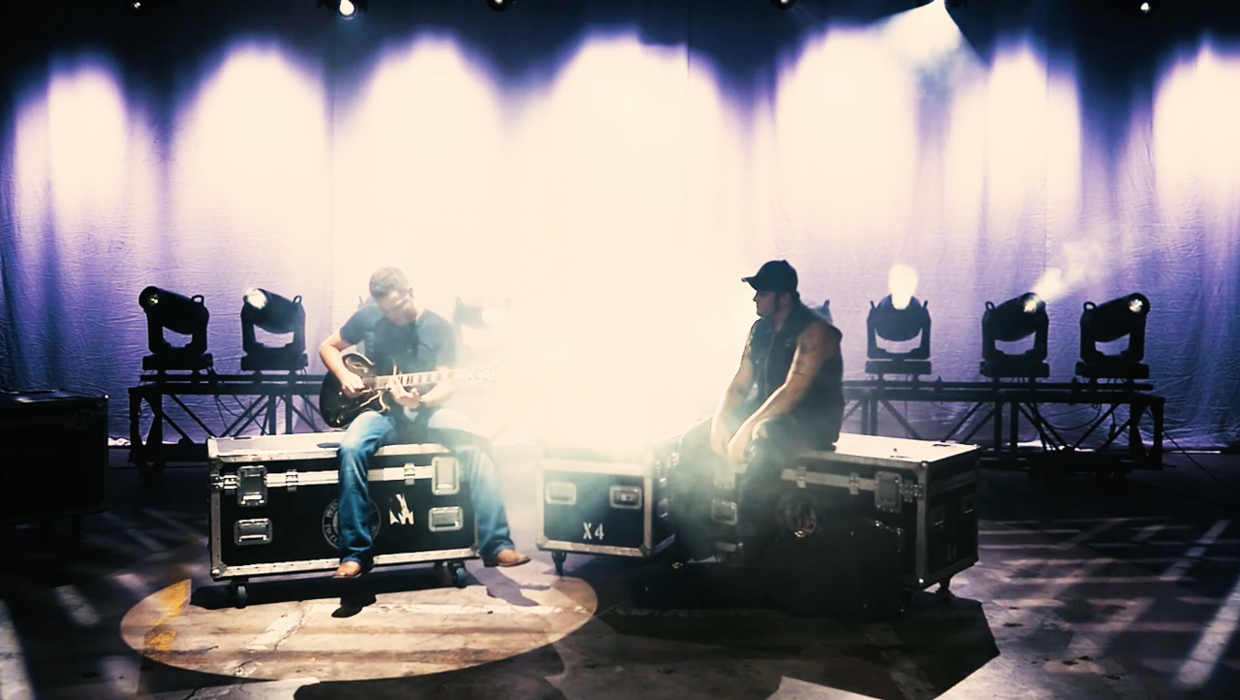 NASHVILLE, Tenn. (July 27, 2018) –– Fire River Records’ flagship recording artist, The Band Steele            (Bo Steele/Ben Rubino), will celebrate the television broadcast debut of its latest video, “195.”  The clip is slated for a world premiere next week on Heartland TV’s “Country Fix” Episode 208 (Week of July 30, 2018) ––check listings for air dates/times here: http://www.watchheartlandtv.com. The original tune, written by Steele and Rubino, is a road warrior anthem for the touring artist and appears on the pair’s debut album, Moon In A Mason Jar.
Directed and produced by Marcel Chagnon (A Podunk Production), who has also worked behind the camera to direct Vince Gill and The Time Jumpers, Frankie Ballard, Old Dominion and Clay Walker, the piece was shot in Alabama, along State Route 195, and at various notable Nashville locations and destinations. Marcel and country recording artist Craig Campbell make cameo appearances in the video.
Offering viewers an intimate glance at the sacrifices made by the touring artist who dedicates his life to the road, the true-to-life lyrics combined with realistic footage authentically depict the tumultuous strain on personal relationships.

“It was important for us to shoot segments of the video from Alabama Highway 195,” Ben Rubino said. “It’s a lifeline that runs in-and-out of our hometown—lots of memories and heartbreaks live on that road.”

“It’s tough being on the road. The opportunity is awesome, but it comes with a cost—the time we sacrifice away from loved ones,” added Bo Steele. “You have to be emotionally and mentally strong for the people at home.”

ABOUT THE BAND STEELE
The Band Steele is made up of two high school friends from Winston County, Alabama, who began performing together at the age of 14. Fast forward to 2015: the two young, talented musicians quickly became Internet Phenoms and signed a record deal with the New York City-based indie label, Fire River Records. In three short years since the ink has dried, The Band Steele has become must-see, must-hear arena act captivating country music radio programmers, fans and the music industry as a whole. The pair has released two studio-recording projects, two singles to country radio and filmed five music videos. The label has just announced the upcoming release of the duo’s third single; “Sit Awhile” (from Moon In A Mason Jar) set to impact country radio in August 2018.

Passionate to recognize those who serve and sacrifice to risk their lives to lend aid to others—our military service men and women, veterans, first responders, as well as our country’s linemen—The Band Steele wrote and released the song, and corresponding music video, titled “The Lineman.” Bo Steele and a Band Steele original tune are featured in the Lionsgate film “Life On The Line” starring John Travolta (2016).